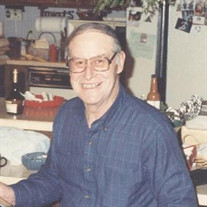 Virgil “Radian” Denton, 87, of Elizabethtown, IL (or the Center of the Universe as he called it), went to be with the Lord on September 7, 2019 after a long battle with emphysema. He was born on May 14, 1932 to the late Virgil and Agnes Denton. He was preceded in death by his sister, Joyce Willis, of Eldorado, IL and his great granddaughter, Willow Sheedy, of Cave In Rock, IL. Virgil graduated from Cave In Rock High School in 1950 and immediately entered the United States Air Force. He proudly served for four years during the Korean War conflict. After being honorably discharged, he started his career as an underground miner and electrician in the fluorspar industry, all while maintaining a farm. In 1966, he started with Missouri Portland Cement as the manager of the Cave In Rock Quarry. He oversaw the quarry through many of its changes into Dravo Basic Materials and finishing with Martin Marietta. During this time, the quarry also grew from 30 employees to almost 100 employees, making it the largest employer in the county at the time. He was extremely proud of the success of the quarry, which he credited to the outstanding employees that he called family. Upon his retirement in 1998, he continued consulting for a new aggregate plant expansion in the Bahamas. He enjoyed attending sporting events of his grandchildren and spending time with his family. Virgil was an avid reader, history buff, and enjoyed many rounds of golf. He also loved to entertain his friends at the Golden Circle. He is survived by his wife, Rosalie Denton, of Cave In Rock, IL; his children, Rene Denton of Cave In Rock,IL, Rhonda (Scott) Figg of Stonefort, IL, and Mark (Stephanie) Denton of St. Charles, MO; and his grandchildren, Haleigh Shaw of Cave In Rock, IL, Slayden Figg of Stonefort, IL , and Sienna Figg of Stonefort, IL. A celebration of life memorial will be held at HCFS Funeral Home in Rosiclare, IL on Saturday, September 14th, 2019 from 1:00pm with visitation from 11:00am till time of service at funeral home.In lieu of flowers, donations can be made to the Golden Circle Senior Citizens Center of Hardin County.

The family of Virgil Radian Denton created this Life Tributes page to make it easy to share your memories.

Send flowers to the Denton family.