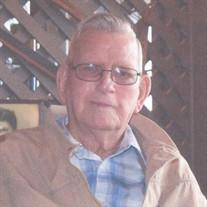 Vernon “Bruzz” Shaw, 93, of Rosiclare, went to be with the Lord on Monday, January 11, 2021 at Rosiclare Rehabilitation and Health Care. He was born on August 8, 1927, to Clarence and Murble Shaw. In 1947 he was married to Ruth Moore Shaw. To this union were born six children – Michael Shaw (Katie), Vernon “Bub” Shaw (Rhonda), both deceased, Larry Shaw (Debbie) of Rock Springs, Wyoming, Dennis Shaw (Lori) of South Jordan, Utah, Debbie Gray (John) of Rock Springs, Wyoming, and Jim (Inez) Shaw of Rosiclare. In 1969 on May 10th he was married in Carpentersville, IL to the love of his life, Mary Shaw, for 51 years. Bruzz loved Mary’s niece, Rosemary Milligan Heller (Guy), Charles Milligan, deceased, (Betty), and Lennie Milligan (Linda). Bruzz was an ordained preacher since 1953. He pastored churches and preached in Northern and Southern Illinois. He loved his church family at First Baptist in Rosiclare for 39 years. He had several jobs during his lifetime, but his favorites were preaching and he was so proud of his great nephew Larry Hammer, Jr. when he started preaching and pastoring at a church. His other favorite was driving the school bus. He always called them “his kids”. He was an avid reader, loved traveling, fishing, loving his cats, shopping, and eating at the Dairy Barr in Golconda almost every day. His health began to fail a couple of years ago, but he still prayed calling people out by name. Bruzz was preceded in death by his parents, a son, Vernon “Bub” Shaw, and a daughter-in-law, Rhonda, a grandson, James Shaw, Jr. two brothers, Francis Shaw and Glen Shaw, and a sister, Arlene Shaw Clark. Survivors include his wife, children, nieces and nephews, grandchildren, great-grandchildren, great-great-grandchildren, church family, and lots of friends. So, Bruzz, reap your rewards and wait for us on Heaven’s shore. Serviceswill be held 1 PM Friday January 15, 2021 at Hardin County Funeral Service in Rosiclare, IL with burial to follow at Good Hope Cemetery. The family will receive visitors from 5:00 PM to 8:00 PM Thursday January 14, 2021 at the funeral home. Webcasting of this service is available at www.gilbertfunerals.com.

The family of Vernon "Bruzz" Shaw created this Life Tributes page to make it easy to share your memories.

Send flowers to the Shaw family.