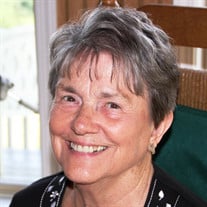 Velma “Louise” Thomas, 83, Brownsburg, formerly of Kokomo, passed away at 10:45 am on Sunday, November 11, 2018, at Brownsburg Meadows Healthcare, after a 12 year battle with Alzheimer’s. She was born March 30, 1935, in Crittenden County, KY. She was the daughter of the late Conrad & Louisa (Myers) King. On July 4, 1953, in Marion, KY, at Marion United Methodist Church, she married Donald G. Thomas who preceded her in death September 15, 2017. Louise graduated from Marion High School. After graduation she married Don while he was a college student. After their college years, Louise and Don spent time in several states while he was in the Air Force. Louise was extremely proud of the fact she was the first woman to solo at the local air club while they were stationed at Mission Air Force base in 1958. In 1962, they settled in Kokomo, where they lived until 2010. While in Kokomo, Louise worked at Howard County Equipment Co., and Dorothy Edwards Realtors. Through the years she was a member of both Tri Kappa and PEO. Louise was also a member of Shiloh United Methodist Church in Kokomo for nearly 50 years where she served on numerous committees and assisted with various church programs. Louise, along with Don were supporters of education and were longtime supporters of Ivy Tech Community College where they established a scholarship in their name. She was also an avid Purdue Basketball fan. Louise is survived by her children, Denise (Marty) Wagner, Brownsburg, Guy (Kathy) Thomas, Brownsburg, Miriam Thomas, Kokomo, and Aaron (Barb) Thomas, Brownsburg; grandchildren, Jared Thomas, Samantha Wagner, Rachel (Ethan) Thomas Demerly, Allison Wagner, Noah Thomas, Lydia Thomas, and Grant Thomas; great-granddaughter, Nora Demerly; brother, Joseph (Clement) King, along with numerous nieces and nephews. Louise was preceded in death by her parents; husband; and siblings, Willard Rudell King, and Thelma King Johnson. Friends are invited to visit with the family from 5-8 Thursday, November 15, 2018, at Shiloh United Methodist Church, 5741 W. 100 N., Kokomo. A celebration of life service will be held at 2:00 pm Saturday, November 17, 2018, at Gilbert Funeral Home, 117 W. Bellville St., Marion, KY, followed by a graveside committal service. Friends are invited to visit with the family from 1:00 pm until time of service on Saturday at the funeral home in Kentucky. In lieu of flowers, memorial contributions may be made in Louise’s memory to the Ivy Tech Foundation for the Don and Louise Thomas Scholarship, PO Box 1373, Kokomo, IN 46903, the Marion United Methodist Church for the stained glass window refurbishment project, 112 S. College St., Marion, KY 42064, or the Alzheimer’s Association, 50 E. 91st. Street, Suite 100, Indianpolis, IN 46209-4830. Stout & Son Funeral Home have been entrusted with arrangements. Messages of condolence may be left online at www.stoutandson.com.

The family of Velma Louise Thomas created this Life Tributes page to make it easy to share your memories.

Send flowers to the Thomas family.