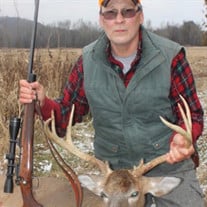 Thomas “Tom” Morton Black departed this life September 02, 2021 from complications of a stroke at Skyline Hospital in Nashville, Tennessee. Tom was born to Quentin and Mary Arflack Black on December 18,1954. He worked as an EMT and Surgical Technician until he pursued his education at Henderson Community College. From that point he worked at Baptist Madisonville Health as a Surgical RN until recently retiring. He worked a total of 43 years in the health care field. During this time he made lifetime friends that he loved dearly. Tom was the most devoted Husband, Father, Grandfather and Friend. He was so talented in so many aspects of his life. He was a genius with words and writing . He had many published articles in magazines related to hunting. As he was an avid outdoorsman and hunter, he recorded in journals each hunting season his success and failures . He recorded detail by detail each hunting expedition he went on. He was always planning his next hunt out West. Tom was also an amazing cook and it brought him such joy to share his specialties with his family and friends. He took every chance he could to hike, hunt and camp. He was a very spiritual man saying the woods is my Church. He could sit on a bluff , walk a hill or mountain , look down valleys and see God’s workmanship, praising him for his Glory. Tom is survived by his wife of 34 years, June Wagoner Black, his step sons that he raised as his own, Bryan Long and Shaun Long both of Marion Kentucky , Four Grandchildren, Matthia Long, Tristan Long, Hannah Long and Kinley Freeman, Mother ,Mary Black of Salem Kentucky, Sisters, Martha June Gilland of Lola Kentucky, Lila Jo Edmonson (Kenny) of Marion , Kentucky, Brother, Glen Black of Salem Kentucky, and numerous other Family members and Friends that he loved so dearly He was preceded in death by his Father, Quentin Black. Tom’s life would be seen as short to many but those of us who were blessed to be touched by him understand that his existence and the imprint he left in our hearts far exceed the quantity of time that he stayed here. Services will be held at 2:00 pm Sunday September 5, 2021 at Gilbert Funeral Home in Marion, KY with burial following at Frances Cemetery. Friends may call from 10:00 until service time at the funeral home

Thomas &#8220;Tom&#8221; Morton Black departed this life September 02, 2021 from complications of a stroke at Skyline Hospital in Nashville, Tennessee. Tom was born to Quentin and Mary Arflack Black on December 18,1954. He worked as an EMT... View Obituary & Service Information

The family of Thomas Black created this Life Tributes page to make it easy to share your memories.

Send flowers to the Black family.