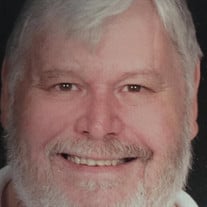 Steven Ray Rutherford, 66, of Elizabethtown, IL, passed away peacefully on March 22, 2018 at Lourdes Hospice Center in Paducah, KY. Steve was born October 1, 1951 to Harry Don Rutherford and Betty Jean (Williams) Rutherford. He worked as an Independent Insurance Agent for many years in Elizabethtown and Vienna. He was also the owner of the Family Package Store in Elizabethtown. He married Kim (Oetjen) Rutherford on September 20, 1980. They have one child, Roman Ray Rutherford, age 13. His son was the greatest joy in Steve’s life. Other survivors include his devoted brother-in-law: Gary Gross; Nephews: Garrison & Rani Gross and Gannon Gross; and Great nieces: Victoria Gross and Arri Gross. Also surviving are his caring in-laws: Gilbert and Norma Oetjen, Kurt and Michelle Oetjen, and Kelly and Lisa Oetjen, together with nieces and nephews: Vance, Victor, Ava & Addison Oetjen, and Kyle and Kaci Oetjen. He was greeted into heaven, surrounded by the loving arms of his mother: Betty Rutherford, his grandmother, Vena Denton and his sister: Sherry Dawn (Rutherford) Gross. A celebration of his life will be held Sunday, March 25, 2018 at 3:00 in the afternoon at Hardin County Funeral Service, Cox Chapel. Service will be officiated by Rev. Stan Pennell and Rev. David Otten. Visitation will begin at 1:00 p.m. A reception will follow the memorial service at the Catholic Church Hall for family and friends. Per his request, Steve will be cremated. His ashes will be spread at a later date on the Rutherford Farm and Cave Hill Cemetery. In lieu of flowers, expressions of sympathy may be made to his son’s 4-H Club, The Corn Fed Clovers, or to the Hardin County Senior Center for home delivery of meals.

The family of Mr. Steven Ray Rutherford created this Life Tributes page to make it easy to share your memories.

Send flowers to the Rutherford family.