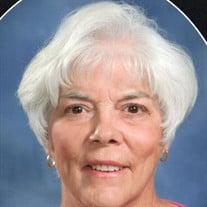 Mrs. Sarah (Neidig) (Cruce) Drake, age 77, of Franklin, KY passed away on Wednesday, June 16th, 2021 at 10:40 PM at the Medical Center in Franklin, KY. Visitation will be held on Sunday, June 20th, 2021 from 1:00 PM to 5:00 PM at Gilbert Funeral Home & Crematory. A funeral Mass will be held on Monday at 10:00 AM at the St. Mary Catholic Church, 403 North Main Street in Franklin, KY. with Father Tom Buckman as celebrant Following the funeral mass, a graveside service will be held at the St. Williams Catholic Church Cemetery, 860 South Main Street in Marion, KY at 3:00 PM Father John Okoro officiating. Sarah was born on April 26, 1944 in Evansville, IN to the late John E. Neidig, Sr. and Viola (Greubel). She is also preceded in death by her first husband, Paul “Eddie” Cruce; 3 brothers, John, David and Mike Neidig; and 1 sister, Janet Weiss. She is survived by her husband of 20 years, Ed Drake of Franklin, KY; his children, Alan Drake (Judy) and Gary Drake (Kitty), both of Louisville, KY; their children Chad (Brittany) Drake, and his 3 children; Joe Drake (Olivia) and Josh Drake; 3 brothers, Jim (Cindy)Neidig of Springfield, IL, Tom (Cathy) Neidig of Fort Branch, IN and Larry (Cindy) Neidig of Wooster, OH; 3 sisters, Barbara (Randy) Dike of Owensville, IN, Jackie (Jeff) Steckler and Rita (Greg) Wilzbacher, both of Haubstadt, IN; and numerous nieces and nephews that she thought the world of as they did her. Sarah was a member of St. Mary Catholic Church in Franklin, Ky. She worked as a Secretary for Tyco Electronics retiring in 2009. Sarah actually had many different occupations, she had worked at Baynham shoes in Evansville, the human resource department of Old National Bank, Evansville, IN. After marriage, she continued her career in banking at Marion, KY, worked for the local cable company, Dueling Grounds, Walmart and the outlet mall in Eddyville, KY. She and her late husband Eddie Cruce ran the 88 Dip in Marion before building what was Cruce’s Coachman restaurant. Sarah was a member of the St. Mary Ladies Guild and Franklin Country Club where she enjoyed playing golf with the ladies as well as with her husband, Ed. Memorial contributions may be made to St. Mary Catholic Church, 403 N. Main Street, P.O. Box 388, Franklin KY. 42135. Gilbert Funeral Home & Crematory website is www.gilbertfhonline.com. The Facebook page is Gilbert Funeral Home & Crematory, Inc. The obituary phone line is 270-586-8844.

The family of Sarah Cruce Drake created this Life Tributes page to make it easy to share your memories.

Send flowers to the Drake family.