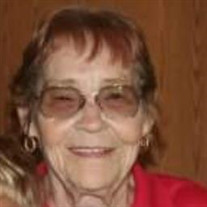 Ruby Maizie (Blair) Rose was born on March 14, 1926, at Cave In Rock, Illinois, to the late Henry Harrison and Elva (Rutherford) Blair. She departed this life on August 10, 2018, at Carbondale Memorial Hospital, being at the time of her passing 92 years, 4 months and 27 days. She married Joseph Harlan (Jack) Rose on December 7, 1953. He preceded her in death on July 2, 1979. She is survived by two sons, Seba Joe Rose, Elizabethtown, Il. and Floyd Dean (Blanche) Rose, West Memphis, AR, and a daughter, Myrna Rae Mathis, Rantoul, Il. She is also survived by three grandchildren, Steve ( Tiffany) Pennell, Benton, Il., Michelle (Kirk) Swanson, Paxton, IL, and Ryan (Jennifer) Mitchell, Newnan, GA; six great grandchildren, Seba Dean, Zach Pennell, Alex and Andrew Swanson and Ethan and Hynlee Mitchell; two nephews, Curtis (Lisa) Blair and Carlos (Doreen) Blair, and one niece, Cathy (Doug) Ralph; and innumerable others who Ruby treated as her own. In addition to her parents and husband, Ruby was preceded in death by both her brothers, Seba Blair and Herbert, a nephew, Cletus Blair and a daughter, Velma Ruth Coffee. Ruby and Jack owned and operated the Cave In Rock Funeral Home from 1968 until his death in 1979. Afterward, she worked as a waitress at several Cave In Rock restaurants until she retired. She lived with her devoted son, Joe for the past twenty-five years and was proud to has lived relatively independently until three weeks prior to her passing. Ruby loved her birds and found them great company when Joe was on the road. She loved reminiscing with family and friends. Her humor and caring were evident in all she did. One thing is certain, whether you knew her as mom, Mamaw, Aunt Sis, Ma Ruby or Ruby, if you ever met Ruby Maizie Rose, you will never forget her. She left us all better people for having known her.

Ruby Maizie (Blair) Rose was born on March 14, 1926, at Cave In Rock, Illinois, to the late Henry Harrison and Elva (Rutherford) Blair. She departed this life on August 10, 2018, at Carbondale Memorial Hospital, being at the time of her passing... View Obituary & Service Information

The family of Ruby Rose created this Life Tributes page to make it easy to share your memories.

Send flowers to the Rose family.