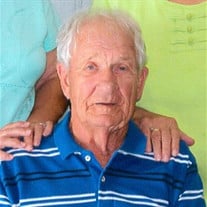 Preston Creed Beavers, 83, of Marion, KY. died April 15, 2019 at the Ray and Kay Eckstein Hospice Center in Paducah, KY. He was a member of Mexico Baptist Church. Shortly after graduating high school, Creed became part of the great migration to work for US Steel in Gary, Indiana. After a few years he became home sick for Kentucky. He returned to Crittenden Co. to work for Johnson Electric fixing TVs, a skill he learned from a correspondence course while in Gary. Eventually he took the job he was most famous for at the Crittenden Motor Company. Creed was “The Parts Man”. He left the parts business to work at Anaconda Aluminum in Sebree. There he became a conduit for Crittenden Co. workers, getting many on at the plant. He eventually came back to the parts business as part owner of Crittenden Auto Parts where he served the public any hour of the day or night until his retirement just a few years ago. Survivors include his wife, Sue Beavers of Marion, KY.; children, Ronnie (Teresa) Beavers, Pam (Randall) Turley and Patty (Baron) Guess all of Marion, KY.; sister, Joyce (Ben Grayson) Dinsmore of Marion, KY.; daughter-in-law, Rhonda Beavers of Marion, KY.; step daughter, Tina Brewer of Madisonville, KY.; 20 grandchildren and 26 great grandchildren. He was preceded in death by his parents, Forrest Beavers and Mary Elizabeth Patton; son, Donnie Beavers; sister, Mary Stroud and 2 step children, Jeff Fox and Theresa Meadows. Services are scheduled for 11 AM Wednesday April 17, 2019 at Gilbert Funeral Home in Marion, KY. with interment in Mexico Cemetery. The family will receive visitors from 5-8 PM Tuesday at the funeral home. Donations may be made to the Ray and Kay Eckstein Hospice Center or Gideon's International.

The family of Preston Creed Beavers created this Life Tributes page to make it easy to share your memories.

Send flowers to the Beavers family.