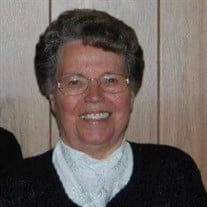 Olive Patricia Ann Ledbetter of Cave-in-Rock, IL passed away Wednesday 10:30 A.M. at the Hardin County General Hospital. Patsy was born August 18, 1933 the only daughter to John G. and Mary E. Pearson. At the time of her passing, she was 87 years and 8 days old. On February 18, 1948, Patsy was united in marriage to Clarence Herbert “Joe” Ledbetter of Rural Cave-in-Rock, Il. Patsy loved to tell folks that when she and Joe first married, they lived in a chicken house which was absolutely true. They lived their married lives in two other places than the “chicken house”. All three residences were within 150 yards of each other. Patsy is survived by Joe, her husband of 72 years. She and Joe had one daughter Elizabeth Christine/Butch Gowins of Rosiclare, one granddaughter Nancy/Mike May and one great-grandson Taylor Turpin of Princeton, In. When Nancy and Mike were married, she gained 3 bonus grandchildren, Keith, Shayne and Caitylne May of Princeton as well as 7 bonus great-great grandchildren. She was preceded in death by her father and mother John and Mary Pearson along with her mother and father-in-law Selba and Bertha Ledbetter. In 1994, Patsy retired from the profession that she loved almost as well as the rest of her family. She was a teacher for 32 years having taught in various schools in Hardin County. She taught the most of her distinguished career at the Hardin Co. School in Elizabethtown. One of the greatest joys of her life was meeting with her many students she had taught in the 3rd grade which was the grade she taught the bigger part of her career. She and Joe hardly went anywhere but what she would meet one of her past students and it was a chore for Joe to tear her away from her visiting. Patsy was a painter. The Ledbetter house has many pieces that she painted while taking a course in Marion, Ky. Patsy talked for several years about writing a book and she fulfilled that dream. She wrote, along with help from Joe and computer assistance from her great friend and co-worker Darlene Hamilton a great book entitled “The Way It Was in Hardin County Volume 1” It was volume one because until her health degenerated to a point she could no longer hope, she intended to write volume 2. Her book was an extensive account of the past history of Hardin County with stories of its various schools, churches, riverboats, and many of the county’s interesting and storied characters. Before the Delta Queen stopped running the Ohio River, she was a frequent “step-on” speaker on the most magnificent of paddle boats as well as some of the other great ones. Her presentations were always about her beloved Hardin Co. She was an “Ohio River Kid”! It’s muddy waters ran through her veins and she proudly admitted it. Her grandparents, Richard and Olive B. McConnell were the first ferry boat operators in Hardin Co. Her grandfather, along with another relative constructed a river boat in the cave in what is now the Cave-in-Rock State Park. It has been said that other than loving parents, no one shapes the lives of children as much as a kind and caring school teacher. Patsy was certainly that type of a teacher. It was not unusual, before the laws made it impossible, for she and Joe to take into their home, some child who was having difficulty in school or when sickness or other situations took the parents temporarily out of the home. Patsy attended the First Apostolic Church in Rosiclare until her health made it impossible. (by the way, I am sure that it was because of her son-in-law’s excellent preaching)! Patsy was a life-long member of the United Methodist Church in Cave-in-Rock. It goes without saying that she will be greatly missed by Joe and the rest of her family along with a host of her many friends. Two of her favorite pieces of literature were found in very short prose. The authors are unknown: A wise old owl lived in an Oak The more he heard, the less he spoke The less he spoke, the more he heard Now wasn’t that a wise old bird! The next piece was a motto that she and Joe lived their entire 72 years of marriage by: Use it up…wear it out…maker it do…or do without Services are scheduled for 1:00 PM Saturday August 29, 2020 at Hardin County Funeral Service in Rosiclare, IL with interment in Cave Hill Cemetery. The family will receive visitors from 5-8:00 PM Friday at the funeral home.

Olive Patricia Ann Ledbetter of Cave-in-Rock, IL passed away Wednesday 10:30 A.M. at the Hardin County General Hospital. Patsy was born August 18, 1933 the only daughter to John G. and Mary E. Pearson. At the time of her passing, she was 87... View Obituary & Service Information

The family of Olive Patricia "Patsy" Ledbetter created this Life Tributes page to make it easy to share your memories.

Send flowers to the Ledbetter family.