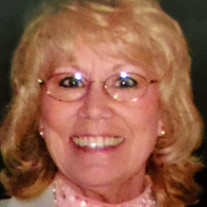 Michele (Potts) Tinault was born on October 10, 1943 in Rosiclare, IL to Thomas Ray and Norma Lacy (Fowler) Potts. The sometimes shy but quick witted strawberry blonde was 7th in line of the 8 membered inseparable group of siblings. There... View Obituary & Service Information

The family of Michele Tinault created this Life Tributes page to make it easy to share your memories.

Send flowers to the Tinault family.