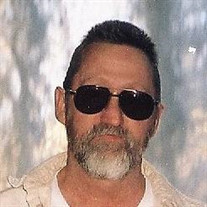 Michael Dewey Kimes Came into this world on Wednesday, October 20, 1954 in Marks, Mississippi. Mike's parents Lois Bernice Thompson Kimes and Dewey Kimes along with his sisters, Bonnie Kathleen and Pansy Ruth, welcomed him into their family. Five years later his little brother, Karl Wayne joined them. Mike moved with his family to Illinois when he was a child and began school in Harrisburg, Illinois. Lois and the kids welcomed Charles Gobin into their family. Charles was a loving step dad to the kids. During Mike's lifetime, he became quite accomplished at many things, He worked as an apprentice in a heating and air conditioning company in Eldorado while in high school. He drove a truck for Denny & Simpson trucking for many years. Mike loved being in the truck and friends he made during that time in his life. Mike was so proud when his son, Christopher, was born in July of 1982. He loved him dearly and enjoyed the time they spent together. As with all families, that time was too short. Mike was an avid fisherman and could always be counted on to have the fish ready when a fish fry was planned. Mike was very creative. he made clocks out of cypress wood and did many wood projects for his sisters and brother for Christmas. Mike found that he loved computers after he was unable to work any longer and spent hours programming and working on his computers as well as for friends and loved ones. Mike loved his family, country music, cowboy boots and he loved to laugh. Mike leaves behind his beloved son, Christopher, his brother, Wayne and wife Sheila, brother, Donnie Gobin and wife Betty, his nephew, Frankie Graves and wife LeCretia, his nieces, Christy Conkle and Husband Mitchell and Adrienne Tripp and husband, Dustin and his brother-in-law, Frank Graves. He also leaves behind four great nephews and four great nieces as well as many friends. Mike left us on Sunday, June 24, 2018. He will be greatly missed and always loved. Services will be on Thursday, June 28, 2018 at Hardin county Funeral Service- Cox chapel in Rosiclare, Illinois at 3:00 p.m. Family will receive visitors from 1:00 p.m. until time of service. Pastor Fred Birch will officiate service. Burial will follow at Shain Cemetery in Omaha, Illinois.

Michael Dewey Kimes Came into this world on Wednesday, October 20, 1954 in Marks, Mississippi. Mike's parents Lois Bernice Thompson Kimes and Dewey Kimes along with his sisters, Bonnie Kathleen and Pansy Ruth, welcomed him into their family.... View Obituary & Service Information

The family of Michael Dewey Kimes created this Life Tributes page to make it easy to share your memories.

Michael Dewey Kimes Came into this world on Wednesday, October...

Send flowers to the Kimes family.