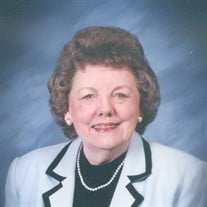 Margaret June Strong Johnson passed away January 31, 2021 at Baptist Health Madisonville. She was born June 4, 1924 in Princeton, Kentucky. She was a graduate of Butler High School Class of 1942-43 and married James William Johnson also of Princeton, Kentucky on March 2, 1948. For 10 years she worked as commercial clerk and operator for South Central Bell. She and her late husband, James William Johnson founded Johnson Furniture and Appliances in Marion, Kentucky in March 1950 and she worked in the business for over 40 years. She was a member of Marion United Methodist Church where she was active in the music department and served as a Sunday School Teacher for many years. She was a member of the Church Administrative Council and an officer in the United Methodist Women. She was a member of the Crittenden County Home Makers and charter member of the Crittenden County Chamber of Commerce where she served as director for many years. Mrs. Johnson was also a charter member and director of Marion Main Street. She was a 70 year member of Marion Women's club and also a member of Fohs Hall, Inc. In 2009 she was selected Grand Marshall of the Marion Christmas Parade and 2016 she was awarded the key to the City of Marion in recognition for her numerous contributions to the community. After retiring she enjoyed traveling, china painting, playing the piano and spending time with her children, grandchildren and great grandchildren. Margaret June was preceded in death by her parents, Ona DeBoe Strong and Carl Strong; husband, James W. Johnson; brothers, James Byron Strong of Savannah, Georgia and William Glenn Strong of Princetion, Kentucky. Surviving are her son, James Carl (Amy) Johnson; daughter, Rebecca June (Ken) Crider; granddaughters, Patti (Lester) Merrill of Marion, Kentucky, Shelly (James) Johnson Frydrych of Tijeras, New Mexico, Jeanne Fisher of Bowling Green, Kentucky, Whitney (Tyler) Johnson Bruce of Indianapolis, Indiana; grandson, James Harrison Crider of Marion, Kentucky; sister, Barbara Long Snyder of Princeton, Kentucky; sister-in-law, Alyce Strong of Savannah, Georgia; great grandchildren, Maddie Fisher and Caden Carl Fisher of Bowling Green, Kentucky, Braelyn June Merrill and Bode Merrill of Marion, Kentucky, Carson Frydrych of Tijeras, New Mexico, Tinley Ann Bruce and Bailey Lynn Bruce of Indianapolis, Indiana and several nieces and nephews. Services are scheduled for 2 PM Wednesday February 3, 2021 at Gilbert Funeral Home in Marion, Kentucky with entombment in Mapleview Cemetery. The family will receive visitors from 10 AM until service time at the funeral home. Donations may be made to the Marion United Methodist Church renovation fund.

Margaret June Strong Johnson passed away January 31, 2021 at Baptist Health Madisonville. She was born June 4, 1924 in Princeton, Kentucky. She was a graduate of Butler High School Class of 1942-43 and married James William Johnson also of... View Obituary & Service Information

The family of Margaret June Strong Johnson created this Life Tributes page to make it easy to share your memories.

Send flowers to the Johnson family.