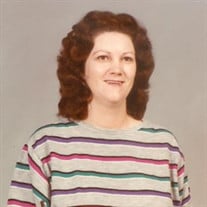 Loretta Eberle, 71, of Marion, KY gained her wings on August 30, 2021 at 4:50 am at Princeton Nursing and Rehab. She was born January 19th, 1950 to Willard Etheridge and Betty Garner. She enjoyed bingo and working the election polls, she attended... View Obituary & Service Information

The family of Loretta Eberle created this Life Tributes page to make it easy to share your memories.

Loretta Eberle, 71, of Marion, KY gained her wings on August...

Send flowers to the Eberle family.