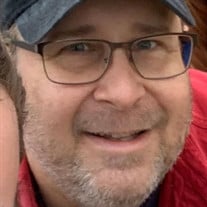 Many have mused over the dash separating the birthdate and death date on a gravemarker, butone man, over the course of his dash, loved fiercely enough for a thousand lifetimes. That man is Larry Wayne Ford, 51, who entered into his temporary slumber on the morning of February 18, 2021.Larry was a tried and true Crittenden Countian. Raised in Marion, Kentucky, since his birth in 1969 to James “Dude” and Charline “Charlie” Ford, Larry took after his father and became an avid outdoorsman. He took great joy and immense pride in a simple country life marked by a passion for firearms, four wheelers, monster trucks, fishing, and working hard. What escapes description, however, was the sheer force of his love for his family.His family and friends loved him widely and robustly, proud each and every day just to know him. His children, especially, walk with pride to call him their father. His only living sister will remember him as her best friend. He was a jokester seemingly by trade, never afraid to tease and joke with others to make them laugh. Truly, his joy was bringing others joy.Mr. Ford was also no stranger to hard, sometimes back-breaking work, holding a number of jobsover the course of his 51 years. Humility followed him everywhere he went. There are few people as hardworking as he was. That was never more evident than his time at Walmart and Treehouse Foods (formerly Bremner), both in Princeton. Simple, less glamorous jobs to many, Larry signed each day with pride when he knew he had put in an honest day’s work.Larry is survived by a son, Derrick Collin Ford; a daughter, Kennedy Mariah-Kathryn Ford; two grandchildren, Aria Lily-McKenah Ford and Phoenix Ray-Daxton Ford; and a sister, Reta Gail Ford-Riley.He is preceded in death by his father; mother; sister, Judy Carolyn Ford; and brother-in-law, James “Jay” Riley.Funeral services will be held at 2:00PM on Monday, February 22, 2021, at Gilbert Funeral Home. Friends may call from 5:00PM until 8:00PM on Sunday, February 21, 2021 during visitation, at Gilbert Funeral Home. Burial will be at Pleasant Hill Cemetery following the service. The family request friends and family to follow CDC requirements for the funeral and visitation.

Many have mused over the dash separating the birthdate and death date on a gravemarker, butone man, over the course of his dash, loved fiercely enough for a thousand lifetimes. That man is Larry Wayne Ford, 51, who entered into his temporary... View Obituary & Service Information

The family of Larry Ford created this Life Tributes page to make it easy to share your memories.

Many have mused over the dash separating the birthdate and death...

Send flowers to the Ford family.