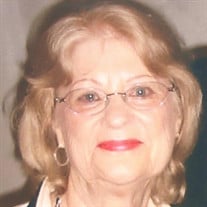 June Young Driver Norman, 83, passed away November 16, 2016 at Crittenden Hospital and Healthcare in Marion, KY after a short illness. She was born in Caldwell County, KY on March 31, 1933 to Johnie and Annie Young. She was retired from Potter... View Obituary & Service Information

The family of June Young Driver Norman created this Life Tributes page to make it easy to share your memories.