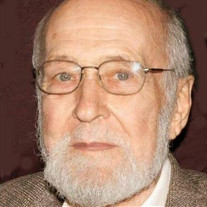 Emery Joel DeWitt, 81, of Marion, Kentucky died Dec. 20, 2019 at the Ray and Kay Eckstein Hospice Care Center at Lourdes following a decade-long battle with dementia with Lewey Bodies. He leaves his wife of 62 years, Barbara (Martin) DeWitt; two daughters, Lucinda (Cindy) Hagan (Ron) of Lone Oak, Kentucky, and Kelly DeWitt of Huntsville, Alabama; a brother, John DeWitt of Pensacola, Florida; sisters Rose Colussi, of East Washington, Pennsylvania, and Mary Evans, of Henderson Ky; 6 grandchildren and 4 great grandchildren. Born and raised in Rib Lake, Wisconsin, Mr. DeWitt moved to Crittenden County in 1955. After graduating from Crittenden County High School in 1956, he joined the Army, traveling the world with his family until his retirement in 1979. Upon his retirement, he attended Murray State University where he earned Bachelors of Science (1980) and arts (1981) and Masters of Science (1982). He served as an inspector for the Crittenden County Health Department, and later as a radiation health inspector for the state of Kentucky. Mr. DeWitt was a Master Mason at Bingham Lodge #256, a member of the Order of Eastern Star at Shady Grove #505. He served on a number of other Masonic bodies, including the York Rite, the Scottish Rite, the (Shriner), and served as the Grand Commander, Knights Templar of Kentucky in 2002. He was active in the local community, serving on the board of directors for Habitat for Humanity and the local library. He was a teacher, a story-teller, a clown, and a friend to all who knew him. He was preceded in death by his parents, Henry and Mabel (Knuth) DeWitt, brother, Arden DeWitt, and infant daughter Cynthia DeWitt. Services are scheduled for 6:00 pm Thursday December 26, 2019 with Masonic Rites preceding at 5:30 pm. Friends may call from 1:00 pm until service time at Gilbert Funeral Home. Interment will be held Monday December 30, 2019 at Kentucky Veterans Cemetery West in Hopkinsville KY. In lieu of flowers, the family asks for donations to the Mercy Health Foundation - Lourdes, Ray and Kay Eckstein Hospice Care Center, PO Box 7100, Paducah KY 42002-7100; in honor of E.J. DeWitt.

The family of Emery J. DeWitt created this Life Tributes page to make it easy to share your memories.

Send flowers to the DeWitt family.