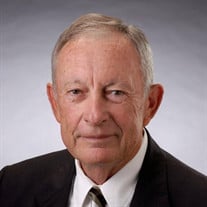 Donald G. Thomas, 82, of Brownsburg, Indiana, and formerly of Kokomo, Indiana, passed away at 9:14 p.m. Friday, September 15, 2017, at Brownsburg Meadows Healthcare surrounded by family. He was born, the son of John Edward and Iris (Lofton) Thomas, Sr., on January 6, 1935, at home in a four room house in the Hebron Community of Crittenden County, Kentucky. On July 4, 1953, he married Velma “Louise” King, in the Marion United Methodist Church, in Marion, Kentucky, and she survives. Following graduation from Marion High School, in Marion, Kentucky, Don attended and graduated from Evansville College with a Bachelors in Business in 1956. While in college, he was a member of the ROTC and the Lambda Chi Alpha Fraternity. After graduation, Don served in the United States Air Force, from 1956 to 1962, and then served in the Indiana Air National Guard. During his service in the Air Force, he went to Flight School and flew a variety of planes, including the F86 Sabre, in which he exceeded the speed of sound and joined the Machbusters less than ten years after he had walked a plow behind a mule. Later, he owned a private airplane, and his children fondly recall trips in their Navion, piloted by their dad. Don went on to become owner of the Howard County Equipment Company in Kokomo, Indiana, a John Deere dealership, from 1962 to 1982. He also sold commercial real estate for Dorothy Edwards Realtors from 1983 10 to 1989 and worked in public relations for Kirby Risk Supply until his retirement in 1999. Upon retirement, he and Louise spent a lot of time between their home in Sarasota, Florida, their cabin in Kentucky and their home in Indiana. He was a member of Shiloh United Methodist Church, in Kokomo, for 48 years, where he served on numerous committees and as a Lay Speaker. He also attended the Church of the Palms in Sarasota, Florida, was a member of Calvary United Methodist Church in Brownsburg for six years and had recently re-joined his childhood home church, Marion United Methodist Church, in Marion, Kentucky, on July 4, 2017. Don was a charter member and first President of the Northwestern Lions Club, President of the Kokomo Chamber of Commerce, member of the Rotary, and served on the boards of St. Joseph Hospital, First National Bank (for over 20 years), and the Grissom Community Council. He also served on the Ivy Tech Foundation Board from (1996 to -2013), which included a term as Chairman of the Board, was awarded an honorary degree from Ivy Tech in 2001 and was recognized as the Ivy Tech Community College’s Benefactor of the Year in 2005.. His passions included flying, golf, his cabin in Kentucky, people, but most of all, family. Don’s biggest joy in life was his family. Everyone he met heard about his children and grandchildren. Don believed that strangers were friends in the making, and he loved getting to know people from all walks of life and had a gift of making everyone feel special. He especially had a passion for education and encouraged everyone he met to better themselves through education. Many people who met him throughout the years will remember him asking, “What is your 5-year plan?” Don spoke frequently of the importance of having faith, family and friends in your one’s life. In addition to his wife of 64 years, he is survived by his children, Denise Wagner and husband Marty, Brownsburg, Guy Thomas and wife Kathy, Brownsburg, Miriam Thomas, Kokomo, and Aaron Thomas and his wife Barb, Brownsburg; seven grandchildren, Jared Thomas, Samantha Wagner, Rachel Demerly and husband Ethan, Allison Wagner, Noah Thomas, Lydia Thomas and Grant Thomas; and great-granddaughter, Nora Demerly. He was preceded in death by his parents and brother, John Edward Thomas, Jr. Friends are invited to visit with the family from 4 to 8 p.m. on Thursday, September 21, 2017, at Shiloh United Methodist Church, 5741 W. 100 N., Kokomo. A celebration of life service will be held at 3 p.m. Saturday, September 23, 2017, at Gilbert Funeral Home, 117 W. Bellville St., Marion, Kentucky, followed by a graveside committal service. Friends are invited to visit from 1 p.m. until the time of service on Saturday at the funeral home in Kentucky burial will take place on Saturday in Marion, Kentucky. In lieu of flowers, memorial contributions may be made to the Ivy Tech Foundation for the Don and Louise Thomas Scholarship, P.O. Box 1373, Kokomo, IN 46903, or the Marion United Methodist Church for the stained glass window refurbishment project, 112 S. College St., Marion, KY 42064. Stout & Son Funeral Home, Russiaville, Indiana, assisted the family with arrangements. Messages of condolence may be expressed online at www.stoutandson.com.

Donald G. Thomas, 82, of Brownsburg, Indiana, and formerly of Kokomo, Indiana, passed away at 9:14 p.m. Friday, September 15, 2017, at Brownsburg Meadows Healthcare surrounded by family. He was born, the son of John Edward and Iris (Lofton)... View Obituary & Service Information

The family of Donald G. Thomas created this Life Tributes page to make it easy to share your memories.

Donald G. Thomas, 82, of Brownsburg, Indiana, and formerly of...

Send flowers to the Thomas family.