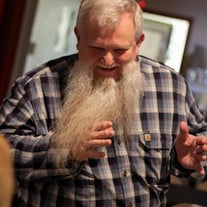 Danny R Stone, 68, of Marion, KY died September 13, 2021 at Vanderbilt Medical Center in Nashville, TN. He was a member of the Bigham Lodge Number 256. Danny was a retired UMWA coal miner, during which time he held many positions at Hamilton 1 and Ohio #11 and was a member of the mine rescue team. Following his retirement from coal mining, Danny worked as a Millwright out of local #1080 (now local #1076). Danny was truly one of a kind - from his award-winning beard to his large presence, overalls, sense of humor and infectious laugh. He had an unmatched work ethic and his word was his bond. He was a devoted father and found immense joy in his “grand girls” who adored him and his best friend, rescue dog, Parker, who was often riding shotgun in his truck. Danny greatly enjoyed riding his Harley and made several trips to Sturgis, South Dakota. He courageously battled cancer for 7 years but never lost his sense of humor or will to fight. Survivors include his daughter, Kristen A. Stone (Andrew Mathias) of Paducah, KY; son, Kirk D. Stone (Sylvia) of Goodlettsville, TN; beloved granddaughters, Kennedy and Camille Mathias; grandson, Daniel Stone and aunt Barbara Kirk of Indianapolis, IN. He was preceded in death by his parents, Shirley Kirk and Charles G Stone. Masonic Rites will be given at 1 PM Friday September 17, 2021 at Gilbert Funeral Home in Marion, KY. Visitation is scheduled from 10 AM Friday until service time. Interment will be in Mapleview Cemetery. The family kindly requests all in attendance wear masks to prevent the spread of COVID-19. In lieu of flowers, please consider donating to ChemoGuardians 911 Crossland Ave, Clarksville, TN 37040 or to Happy Feet Equals Learning Feet Inc. co Jerry Baird 1020 State Route 56 East Morganfield KY 42437.

Danny R Stone, 68, of Marion, KY died September 13, 2021 at Vanderbilt Medical Center in Nashville, TN. He was a member of the Bigham Lodge Number 256. Danny was a retired UMWA coal miner, during which time he held many positions at Hamilton... View Obituary & Service Information

The family of Danny Ray Stone created this Life Tributes page to make it easy to share your memories.

Send flowers to the Stone family.