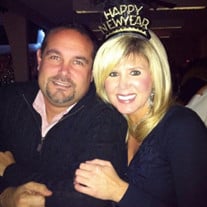 Mr. Britton “Britt” Glenn Gilbert, age 47 of Portland, TN, passed away on Wednesday, January 12, 2022, at the Tristar Hendersonville Medical Center. Visitation will be held Monday, January 17th, 2022, from 1:00 to 8:00 P.M. at Gilbert Funeral Home in Portland, TN. Visitation will continue Tuesday, January 18th, at Portland First Baptist Church, 106 N Broadway, Portland, TN from 10:00 A.M. to funeral service time. Funeral services will be held at Portland First Baptist Church on Tuesday, January 18th at 1:00 P.M. with burial to follow in the Greenlawn Cemetery in Franklin, KY. Britt is survived by his wife Sandy Gilbert of Portland, TN; their two daughters McKenzie and Marlie; his beloved dog Maddie; his parents Terry and Sandy Gilbert of Marion, KY; three brothers, Keith (Angie) Gilbert of Marion, KY, Brad (Valerie) Gilbert of Marion, KY, and Kevin (Kim) Gilbert of Franklin, KY; and several nieces and nephews. Britt was a 1993 graduate of Crittenden County High School in Marion, KY. Following graduation, Britt was a 1995 graduate of Mid-America College of Funeral Service in Jeffersonville, IN. In 2013, Portland Funeral Chapel was purchased and renamed Gilbert Funeral Home, LLC. For the past nine years, Britt has continuously attended to the needs of the Portland community. He was genuinely passionate about his work and serving others in their greatest time of need. That passion was met with unfailing love from those in the Portland community, who took in Britt as one of their own. Britt was a member of the Saturday morning Liar’s Club. The Liar’s Club was started by the original owners of Portland Funeral Chapel, Scott and Kathryn Hamm. Britt enjoyed spending every Saturday morning with Benny Barker, David Hodges, Boyd “Coach” Pitt, Malvern Rahrer, and Ron Renfro. In lieu of flowers, the family requests that donations be made to St. Jude’s Children Hospital. Britt donated to this charity every year, hoping that childhood cancer would one day be a disease of the past. Additional donations may be made to the Jake Hodge Foundation, c/o Farmers Bank and Trust, 201 South Main Street, Marion, Kentucky 42064. Online condolences can now be made at www.gilbertfuneral.com

The family of Britton Glenn Gilbert created this Life Tributes page to make it easy to share your memories.

Send flowers to the Gilbert family.