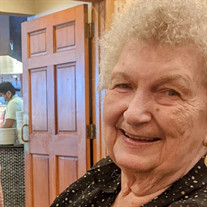 Barbara Ann Price (81) of Elizabethtown Illinois passed away on September 10, 2021 at the Hardin County General Hospital. She was born on April 26th 1940 to John Buris and Irene Elizabeth Waid and married her one true love, Gordon Ewing Price on December 28th 1963. He preceded her in death on August 19, 2004. Others who preceded her in death are her parents John and Irene, her brother Lester Waid, a dear friend that she called her sister Joyce B. Turner, her two brother in laws James and Glen, and a sister in law Geneva, daughter in law Roxanne Crawford and a great grandaughter Zaily Elizabeth Price. Barbara leaves behind 5 sons James Gordon (Sandy) Price of N.Pekin IL, John Ewing (Adrianne) Crawford of Ledbetter KY, Jeffery Glen (Dianna) Price of Elmwood IL, Jerome Henry (Debra) Price of Morgan City LA, and Loy Willis Price of Elizabethtown IL. Grandchildren Toby, Tammy, B.J, Terry, Grant, Jacob, Breanne, Aaron, Kayte, Megan, Jesse, Christy, Jessica, Daniel, Joel, Colton, Loy, Barbie and multiple others that she claimed as her own, along with her 38 Great Grandchildren. Barbara loved spending time with her family and friends. She was happiest when she had a full house. Barbara was an insurance agent and retired from that and then she enjoyed selling Avon products, just so she could get out and and talk with her friends, until she wasn't able to get around anymore. Barbara was a religious woman that kept her faith and love in God, knowing that through him all things are possible. The Funeral will be held at 11:oo am on September 18, 2021 at the Mt. Zion cemetery with a grave side service and visitation preceding starting at 10:00 am. As family and friends just remember, that we will all weep for ourselves, Momma is finally happy, she has gone home to be with Daddy.

Barbara Ann Price (81) of Elizabethtown Illinois passed away on September 10, 2021 at the Hardin County General Hospital. She was born on April 26th 1940 to John Buris and Irene Elizabeth Waid and married her one true love, Gordon Ewing Price... View Obituary & Service Information

The family of Barbara A Price created this Life Tributes page to make it easy to share your memories.

Send flowers to the Price family.